The side windows were removed and a layer of "monkey poop" was placed around the opening. This tape is actually a black butyl rubber tacky tape. It is more elastic and less prone to drying out than the grey type. The windows originally had a strip of foam rubber weather stripping. This was almost completely dry rotted.

(Looks like first project of the summer is to remove all of the remainging windows on the rv and reseal them.) This is really not that big of a project. After removing the screws from the inside window bracket, a putty knife can be used on the outside to gently pry the window off. 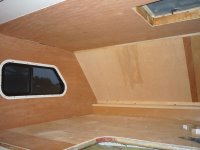 The inside bunk is now finished except for the trim molding and paint. It is very sturdy and should easyally hold several children :) It is a wonder that I did not fall through the orignal bunk when I was doing the initial inspection.